Here’s where you can find some of my work.

A shared world anthology edited by Bram Stoker Award winner Benjamin Kane Ethridge and Brad C. Hodson. Hodson and Ethridge also wrote chapter fiction to bridge the stories, the end result being that each short story stands alone but, if the book is read cover to cover, it reads like a novel. 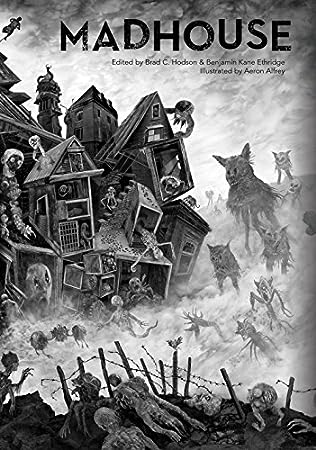 In the middle ages, it was thought that insanity was contagious. Centuries on, we label such ideas as superstitious ignorance. But when John Doe begins to speak after decades of silence, the staff and patients at the Golden Canyon Behavioral Health center begin to realize that behind every superstition lies a horrid truth.

On the night that a vicious sandstorm closes the roads and seals the doors, a plague of madness spreads through the hospital. Two staff members try desperately to hold onto their sanity while searching for the cause – and, hopefully, the cure – of the outbreak.

But they’re not alone. In this shared world anthology edited by Brad C. Hodson and Bram Stoker Award winner Benjamin Kane Ethridge, some of the genre’s most talented authors present their own sanity shattering tales. With fiction by John Skipp, Jeff Strand, Scott Nicholson, Lisa Morton, John Palisano, and many others, the horrible truth is revealed bit by awful bit. Step inside and find out what it’s truly like in the MADHOUSE.

A novel by Brad C. Hodson

Check out DARLING’s page on this site for more reviews, a free preview, the trailer, and other assorted goodness. 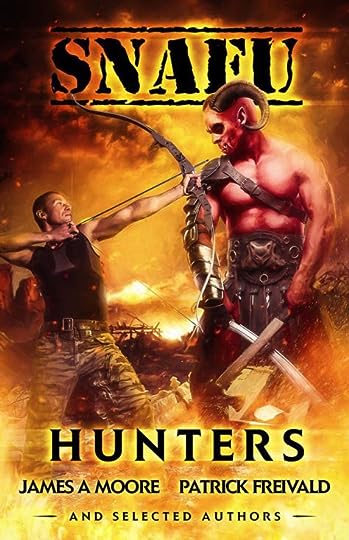 From the darkness of the abyss to the subtle shift of shadows dwell creatures that prey on us all.  Be they straight-up monsters or nightmares behind a human mask, they track us and they kill us. Sometimes, they play with their food, where death would be a kindness. But there is hope. There are those who search out the monsters, those who hunt the hunters.

These are their stories.

Featuring 13 stories of military horror by some of the best known and emerging writers in the genre, including James A. Moore, Patrick Freivald, and more.

Psychotic killers, devious ghosts, alien monsters, howling storms, undead creatures, and other dark forces haunt the highways and the truckers who drive them in these 18 chilling tales!

Available HERE and on audiobook.

With my story “The Scottish Play,” which made the long list for “Year’s Best Horror.”

A film crew tracks a creature in the forest–or is it tracking them…? A producer sells his soul for the rights to a comic book, but the deal isn’t what it seems… The hideous secret to an mega-star’s fame lies in the bottom of his hot tub… An actress buys a smartphone and gets far more than she bargained for… A reality TV show pushes contestants to insane limits… A Hollywood movie palace worker gets trapped in a ghostly nightmare…

Take a behind the screams tour into the dark heart of show business and see the cast of bloodthirsty monsters, power-mad directors, starving zombies, deal-making demons and more horrific creatures tear up the screen! Buy your ticket, bloody the popcorn, and settle into your seat–and don’t forget to turn off your Hell phone…

Grab your copy HERE. Also available as an audiobook.
*

With my gothic story about love, hate, and necromancy at the dawn of the Renaissance, “The Wall of Sorrows.”

Check out www.lore-online.com or buy it directly here.

A regular stream of very, very short horror fiction. My story “Almost” is a part of the roster.

With “In the Halls and on the Stairs,” a story about childhood fears and betrayal.

From the depths of the soul to the depths of hell. From the shadows of your most frightening dreams to the shadows lurking in the corner unseen and waiting. Darkness is painted across the palette of every nightscape. And it’s waiting for you…

Available in ebook and paperback.

Includes my tale of a son dealing with the sins of his father in a Chinese underworld called “The Thousandth Hell.”

Death. Who has not considered their own mortality and wondered at what awaits, once our frail human shell expires? What occurs after the heart stops beating, after the last breath is drawn, after life as we know it terminates?

Does our spirit remain on Earth while the mortal body rots? Do remnants of our soul transcend to a celestial Heaven or sink to Hell’s torment? Are we offered choices in an individualized afterlife? Can we die again in the hereafter? Is life merely a cosmic joke, or is it an experiment for something greater?

Enclosed are thirty-four all-new dark and speculative fiction stories, individually illustrated by Audra Phillips, and exploring the possibilities “after death.”

Ebook and paperback both available.

Featuring “The Philosopher’s Grove,” my story of Aristotle, Xenophon, and a grisly act performed at the famous Academy one winter’s evening.

Twenty-three authors. One exclusive anthology.
Blood Bound Books celebrates its third year of publishing with Blood Rites, a gathering of dark talents that have shared our dreams-and shaped our nightmares. We individually summoned each author to contribute his or her voice to this choir of the damned. Now, we invite you to join the ritual…

Available in paperback and as an ebook.

With my story of sexual obsession and what happens in the space between breaths called “Breathe.”

A flash fiction anthology from Dark Moon Books. SLICES OF FLESH features stories by Ramsey Campbell, Jack Ketchum, William F. Nolan, and a slew of other amazing authors. With cover art by HELLBOY creator Mike Mignola, the net proceeds from SLICES OF FLESH will go to aid the Stephen and Tabitha King Foundation, Project Literacy, and others.

Also check out the audio version on Episode 18 of the “Tales to Terrify” podcast (also available on iTunes).

With “The Other Patrick,” a story that bestseller Michael R. Collings said “is stunning in its simplicity and grace. There is absolutely nothing frightening in it, but it deals intently and directly with a parent’s greatest horror…the loss of a child.”

HORROR FOR GOOD is an anthology released by Cutting Block Press. All the proceeds go to amfAR: http://www.amfar.org/

With my story “Two For Transylvania,” a comedic prequel that re-imagines DRACULA as a massive real estate con.

The third installment in the bestselling series from Pocket Books and the Horror Writers Association, BLOOD LITE 3 continues the tradition of bringing the best of horror-comedy (emphasis on comedy) to print with authors like Jim Butcher, Sherrilyn Kenyon, Kelley Armstrong, and Heather Graham. Edited by New York Times bestselling author Kevin J. Anderson (the DUNE series).

Available at your local bookstore or order online.

WEREWOLVES AND SHAPESHIFTERS: ENCOUNTERS WITH THE BEAST WITHIN

With a story from yours truly about sexual obsession called “Il Donnaiolo.”

Available at your local bookstore or online.

Including “At Winter’s End,” a story about loss and growing old.

From the back cover: Just when you thought it was safe to crawl back into bed . . . we’ve got a new set or terrors! If Night Terrors made you pray for dawn, Volume II will send you into total madness. Step inside the secret chambers of the Vatican and experience the dark side of the papal elections. Meet people only a mother could love; listen to the dead speak, and even more disturbing, hear them cry. Discover the darkness that lives inside the hearts of man, and hide from other worldly tormentors . . . and, if you manage to wake up after these night terrors . . . you’ll wake up dead!

The award-winning cult comedy that’s been called “The best horror comedy since SHAUN OF THE DEAD.” It’s right there on the DVD cover if you don’t believe me.

Available on Amazon and to buy or rent on iTunes.

With my story about love, madness, and obsession called “His Only Company the Walls”

In every room, there is a story. In this hotel, the stories run to the wicked and macabre. Well crafted psychological and supernatural horror offerings await you, each written by a master storyteller. Whether you are looking to be shocked, disturbed or out-right frightened, Voices will have something to titillate your nerves and make your hair stand on end. Leave the lights on and brew a strong cup of tea, the voices in this room plan on keeping you up all night.

With my story about the sins of childhood returning to haunt us as adults titled “Picked Last.”

An anthology of horror and dark fantasy stories and poetry, illustrated with antique illustration from the Osborne Collection of Early Children Books.

“In the Halls of Elsinore” is based on a bit of speech that Hamlet utters in Shakespeare’s most famous play: “The spirit that I have seen/ May be the devil: and the devil hath power/ To assume a pleasing shape; yea, and perhaps/Out of my weakness and my melancholy,/As he is very potent with such spirits,/Abuses me to damn me.” In my story, Horatio is left after the events of the play to learn the truth behind the ghost that haunted his friend.

As an added bonus, a few teachers have contacted me about using this story to help teach their students HAMLET. So you can feel better reading it at work because it’s, like, academic and stuff.

“405” was my first fiction sale and is a bizarre, funny, and no-holds-barred look at what happens when the psychic accumulation of years of road rage explodes on one of the worst stretches of freeway in Los Angeles.