Audiences tuning into the second of three debates between President Barack Obama and Governor Mitt Romney last night were expecting what one member of the town hall audience described as a “knock down, drag out fight.” They were disappointed.

“It wasn’t what we wanted to see,” said Debbie Watkins, a college student from UCLA who watched the debates on television. “We wanted to see blood.”

Instead, the debates derailed just a few minutes in as the two candidates realized they agreed with each other on major issues.

“What I’m coming to realize,” the President said during a question on the economy, “is that Governor Romney is a good-hearted, intelligent man who only wants the best for this country.”

Governor Romney, a tear in his eye, thanked the President. “I have to say,” he added, “that the President has accomplished quite a bit in his four years in office that we don’t give him credit for. Mr. President, I have to apologize.”

After a tear-filled exchange, the two men embraced. The audience was quiet as they began to publicly discuss how to improve the economy, job growth, and enact immigration reform. Half-way through what should have been a debate, when the two candidates realized that half of the crowd had left the auditorium, they laughed. 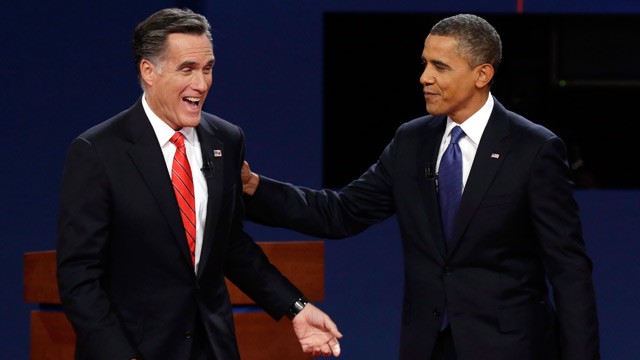 The President then looked straight into the cameras and issued a controversial statement. “Governor Romney and I, following an example set by our running mates, have decided to work together to create a plan that’s the best for America. If I’m not re-elected, so be it. What’s important is that this country thrives.”

Governor Romney nodded. “I think the President should get another four years but, if I’m voted in, I’ll make sure that the plan we come up with together is what’s enacted.”

The two then retired to work through the details of their plan.

Outside the town hall, Republican and Democratic attendees began to riot. A police car was overturned and a nearby preschool was set on fire.

“NOOOOOOO,” one man yelled. “We can’t have this! We have to crush the Democrats! They’re evil!”

A woman then clubbed him in the side of the head with a board ripped from a local church that had been desecrated in the violence. “Death to all RepubliKKKans,” she screamed, the triple “K” somehow enunciated.

Today, the country still reels as violence sweeps across the nation. We’ll have more news as it becomes available.

Brad C. Hodson is a writer living in Los Angeles. His novel, DARLING, will be released at the end of the month. For more information on his work, check out his Bibliography page.